Love Me Tender, Love Me True

Among the many hits written by lyricist Hal David and composer Burt Bacharach, one song had a curious history. When the songwriting team showed it to Dionne Warwick (a frequent collaborator), she initially turned it down. In 1965, the song was first released by Jackie DeShannon. After The Supremes recorded it in 1968, it became a major hit. Its message was pure and simple:

As one monitors current events, Hal David's lyrics become more and more timely. From the political violence being stirred up by demagogues in a Presidential election year to the terrorist bombings in Europe and Africa; from the desperate plight of Syrian refugees to the bitter hatred driving North Carolina's odious Public Facilities Privacy & Security Act and Mississippi's vicious Religious Freedom Restoration Act, it's painfully obvious that the distemper found throughout our society has metastasized into a cancerous attack on human rights.

When one examines the racism, heterosexism, anti-Semitism, and misogyny that capture today's headlines, the theme song from 1961's Carnival! makes one yearn for a kinder, gentler world.


Are such naive sentiments doomed to destruction? Is there any hope at all for peace on earth? That depends on how people treat each other on a one-to-one basis. Sometimes, the intimacy of a simple act of love and kindness can send ripples of warmth and comfort through a person's soul. It's not always about karma. On many occasions, extending a helping hand is the simplest and most logical thing to do.


* * * * * * * * *
One of the most poignant films I've seen since 2008's Departures is Sweet Bean, a most delicate and graceful piece of storytelling by Naomi Kawase which starts slow, seems to be concerned with small culinary details, and then quietly blows the audience way with its depth and humanity. Adapted from a novel by Durian Sukegawa, the film begins with its focus on Sentaro (Masatoshi Nagase), a middle-aged man who makes dorayaki pancakes in his small bakery.


The secret appeal of a dorayaki lies in the red bean paste at its core. Sentaro's treats are far from memorable (he buys the bean paste in bulk) until an elderly woman stops by and changes his life.  At 76, Tokue (Kirin Kiki) is hardly the type of applicant the depressed Sentaro envisioned when he put up a "Help Wanted" sign. The fact that she is willing to arrive for work early every morning and accept a ridiculously low wage (even less than Sentaro offered) doesn't make much sense, either.

But Tokue is a woman with several secrets. The most obvious one is that she knows how to make the perfect red bean paste. For someone like Sentaro (whose lack of enthusiasm is reflected in his pancakes), Tokue's insistence on listening to the stories that the beans tell her of wind, sun, and rain, sounds like sheer madness. Yet there is no denying the sublime taste of her red bean paste. As his customer base rapidly grows thanks to word of mouth, Sentaro has no knowledge of Tokue's backstory other than the fact that she does not have a telephone number and will not write her address down on his standard employment form.


Nor is Tokue Sentaro's fairy godmother. When the shop owner, a gossipy and extremely materialistic woman (Miyoko Asada), tells him what she has heard via the grapevine and demands that Sentaro fire Tokue at once, he can't bring himself to obey (even if it means watching his business go from boom to bust overnight). In her director’s statement, Naomi Kawase writes:


“Cherry trees in full bloom remind us of death. I do not know of any other tree whose flowers blossom in such a spectacular way, only to have their petals scatter just as suddenly. Is this the reason behind our fascination for blossoming cherry trees? Is this why we are compelled to see a reflection of our own lives in them? Our society is not always predisposed to letting our dreams become reality. Sometimes, it swallows up our hopes. Sometimes an impenetrable silence engulfs us. And yet, the joy resulting from commitment and connection to the world allows us to better appreciate its changes and evolution. Sweet Bean is the meeting of two souls who unite in order to face life’s obstacles. How many times must we be knocked down before we can reach paradise?” 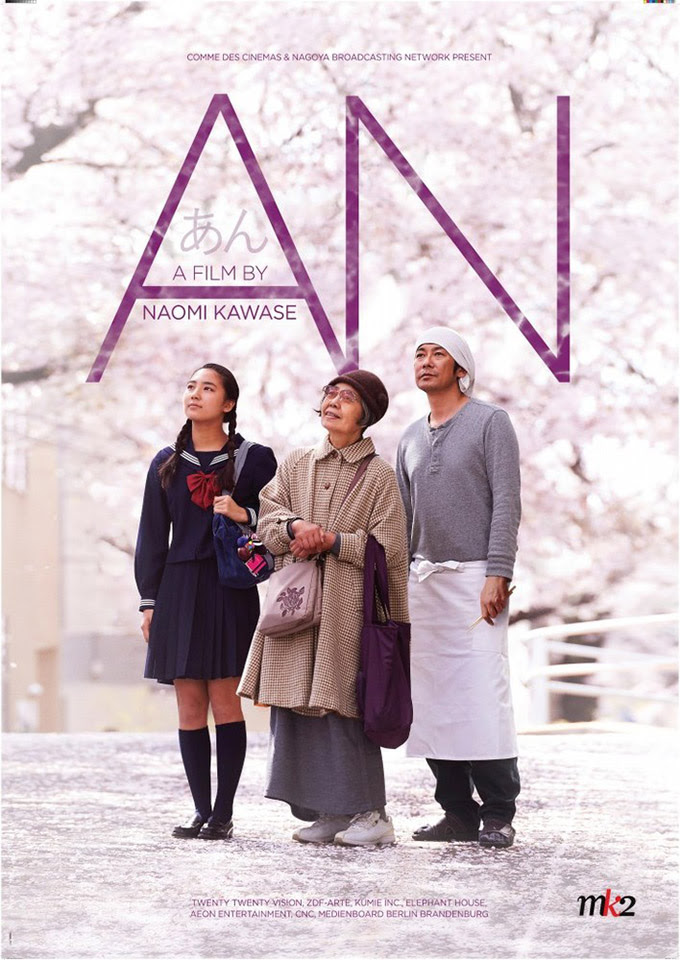 “Throughout our lives, there are times when we might find ourselves filled with regret and despair, and feel like giving in. Despite this (or maybe even because of this) we are nevertheless capable of holding onto our hopes and of continuing to have faith in the future. By unveiling the complex mechanics of this society, I hope to further an understanding of the very essence of existence. Sentaro, Tokue, and Wakana meet when the cherry trees are in full bloom. The trajectories of these three people are very different. And yet, their souls cross paths and meet one another in the same landscapes. After learning that Tokue is infected with leprosy, the story pulls us into a quest for the very essence of what makes us human. As a director, I have the honor and pleasure of exploring different lives through cinema, as is the case with this film.”

With the loss of business following Tokue's departure, the shop owner informs Sentaro that she is planning to turn the business over to her nephew, whom she expects Sentaro to mentor. When Sentaro's friend, Wakana (Kyara Uchida) suggests that they pay a visit to Tokue, the old woman tells them about her life and introduces them to her close friend, Yoshiko (Etsuko Ichihara).

While Kawase's deeply moving film does a splendid job of depicting the discrimination faced by an elderly segment of Japan's population who are forced to live their lives segregated from the rest of society, it also demonstrates how the walking wounded continually seek out and find dignity in their lives. Here's the trailer:


Written one week after a December 2010 suicide bombing in Stockholm that shocked Sweden, I Call My Brothers first appeared in essay form in Dagens Nyheter. Khemiri’s novel was published to great acclaim and was subsequently transformed into a play (directed by Farnaz Arbabi) that toured Sweden with Riksteatern in 2013 and premiered in New York in January 2014. I Call My Brothers has since been performed in Norway, Denmark, Germany, France, Spain, and Finland. In the following clip, Khemiri describes how watching a production of his play in another language helped him to fully comprehend the universality of his drama.


Directed by Evren Odcikin with a lyricism and vitality that sweeps the audience into the story of Amor (Shoresh Alaudini), a young Muslim who tries to appear cool to his friends while he is trembling inside, CFT's production of I Call My Brothers is a triumph for everyone involved.


As the play begins, Amor and his friends are dancing in a club and having themselves a great time. As Amor describes his friendship with Shavi (Mohammad Shehata), he portrays Shavi as his nerdy best friend from childhood days who eventually got married and became a doting father. Nevertheless, Amor and Shavi still consider themselves as close as brothers, remaining in constant touch via phone.

Lately, however, Amor hasn't always been answering Shavi's phone calls as quickly as usual. One night, while dancing in a club, he feels his cell phone vibrating in his pants pocket but ignores Shavi's messages. Amor later learns that a car bomb has exploded and Shavi was desperately trying to contact Amor to make sure he was safe.


For a young Muslim in a large city whose police force is on edge, safety is a critical concern. Crowded Fire Theater’s artistic director, Mina Morita, stresses that:


“...2016 is a time of great verbal, physical, and spiritual violence on every continent. It seems that we are bending under the weight of hopelessness, uncertainty, or fear, even amid the birth of an increasingly global context in our cities and on our digital devices. In a time that is so connected, why do we feel so isolated, so helpless, so unable to access the trust and understanding that can smother violence? How do we stand as individuals and stand together to survive this explosive time? [Khemiri] has created a complicated, powerful portrait of Muslim-influenced, Western-based identities grappling with the weight of accusatory gazes and words. Part of his genius is tapping into the universal levity of humor that can open minds long enough for truths to enter.”

The humor in I Call My Brothers surfaces in Amor's phone calls with Shavi, with his sister, Ahlem (who is helping their parents build a new house outside of the city), with his sarcastic lifelong friend, Valeria, and most notably, with Caroline (a telemarketer who won't take no for an answer). But when Amor tries to make his way home he is distracted and disturbed by the sight of a police car that has pulled over a dark-skinned driver and seems to be interrogating him. From a distance, Amor can see the man's wife nervously sitting in the passenger seat.

Amor's first impulse is to approach the policeman in case a fellow Muslim is being unfairly targeted for harassment. But when he gets closer to the scene and realizes that the driver had merely asked for directions, his embarrassment makes him turn around and quickly head back toward his apartment.

As his self-doubt and paranoia continue to spiral, Amor starts running, hoping that he can get home safely without drawing attention to himself. Suddenly, he finds himself in a conversation with the radiant spirit of his dead grandmother, Tyra (Denmo Ibrahim), who reassures him that she has been with him all through the day -- watching over him, caring about him, sitting beside him, and loving him in the best way she can. With his confidence restored, Amor's pace slows to a walk and he continues into the night.


While Mohammad Shehata (Shavi) and Olivia Rosaldo (Valeria and Caroline) lend sturdy support in smaller roles, the evening's heavy lifting is in the impressive hands of Shoresh Alaudini as Amor and the ever-amazing Denmo Ibrahim, doubling as Ahlem and Tyra. I've enjoyed Ibrahim's work in other productions but, in I Call My Brothers, her expressive eyes become bottomless pools of empathy, doubt, and unconditional love. Hers is an exquisite performance not to be missed.

Performances of I Call My Brothers continue at Thick House through April 23 (click here to order tickets). Here's the trailer: