Shortly after he took over the leadership of the New York City Opera, Julius Rudel secured funding from the Ford Foundation which allowed him to produce three seasons devoted entirely to American operas. Over the course of its history, the New York City Opera has performed more than 60 American operas. Among its nearly 25 world premieres are:
Recognizing the financial challenges faced by documentary filmmakers, the Ford Foundation recently announced a new program entitled Just Films that will provide $50 million for documentary films focused on social issues. This program recognizes the need to support the documentary as an art form as well as help provide new distribution channels for work by documentary filmmakers.

For some documentarians, their topics may be better off framed in a short (than feature-length) film. Rather than aiming for a full 90-120 minutes, some topics are more appropriately showcased in an hour-long documentary that can fit well within the programming demands of television and educational institutions.

I recently watched very impressive three short docs. Each one deals with important subject matter, has huge social ramifications, and focuses on the weaknesses of the human spirit. Although hugely valuable as educational tools, each film tells audiences what they need to hear, rather than what they want to hear.


* * * * * * * *
The release of Pare Lorentz's documentary entitled Nuremberg: Its Lesson For Today offers modern audiences a chance to witness footage that was never released in the United States but was shown throughout Germany following World War II. This documentary is also important because it commemorates the first time that film was actually used as part of the prosecution's plan to indict the Nazis with material taken from their very own film archives.

Finding incriminating footage was easier said than done (some of it was actively being destroyed by Nazi sympathizers). Budd Schulberg (who had written "What Makes Sammy Run?" in 1941) apprehended Leni Riefenstahl as a material witness at her country home in Kitzbühl, Austria. He subsequently took her to the Nuremberg editing room to help the OSS team identify the Nazi figures in her films as well as other German film material they had captured. His brother, Stuart Schulberg, who took possession of the photo archive of Heinrich Hoffmann (Hitler’s personal photographer), became the unit’s expert on still photo evidence. As Stuart Schulberg wrote:


“The greatest technical difficulty involved the use of original recorded testimony from the trial itself. It was important, if the film’s authenticity was to be convincing, that Goering and his colleagues speak their lame lines of defense in their own, well-known voices...It became necessary to secure the wax recordings of the proceedings stored in Nuremberg, to re-record the pertinent words on film and then to synchronize that sound recording with the lip movements of the respective defendants...Many weeks after the original request, the records arrived from Nuremberg. The discs were re-recorded on film in half of one day. About a month later the meticulous job of ‘dubbing’ the original voices of the defendants was completed.”

Stuart Schulberg and Joseph Zigman's 78-minute film was first shown to an audience in Stuttgart on November 21, 1948. The reason the film was never shown in the United States may well have been because its producers could not negotiate a distribution deal with any of the Hollywood film studios.

Watching the documentary today offers a fascinating look at a critical moment in the 20th century when key Nazis were tried before an international court. Considering how easily people throw the word "Nazi" around in today's media, it's especially important for younger generations to see what the real thing looks like. It also offers some terrible but valuable insights into what some Americans did at Abu Ghraib. Here's the trailer:


“As an East Bay native, I knew all about Glenn Burke’s legendary athletic feats at Berkeley High. I followed his career with the Dodgers and A’s throughout the late 1970s and watched and read with great interest when he came out on The Today Show with Bryant Gumbel and in Inside Sports Magazine. I was saddened by his tragic death and thought at the time that his was a compelling story that should be told one day. This documentary allows Glenn’s family, friends, and teammates to tell that story, and it is enhanced with the narration of Dave Morey, one of the most respected voices in Bay Area radio.”

Out: The Glenn Burke Story, is a gripping documentary that shows just how vicious America's homophobia was in our not-so-distant past. Based on Burke's autobiography, "Out At Home: The Glenn Burke Story" (which was written while he was dying of AIDS and living with his sister), it features a wealth of talking heads ranging from Burke's classmates and teammates to sports journalists and Billy Bean (a former MLB player who came out after he retired from professional baseball). 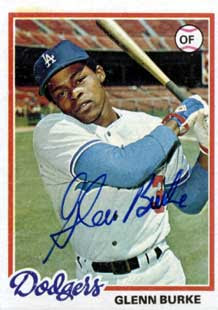 The documentary focuses on the Oakland native who, at first, seemed destined for a career in professional basketball but, instead, ended up making headlines in baseball. From 1976-1979, Burke played for the Los Angeles Dodgers and Oakland Athletics. A multi-talented player and much beloved teammate, he ran smack up against the rampant homophobia that has always been a part of the professional sports world.

While this film interviews many of Burke's former teammates, it also focuses its lens on where America was at that time of Burke's initial success. Anita Bryant was busily rampaging against the evils of the gay lifestyle. In California, the Briggs initiative was aimed at preventing LGBT from teaching in schools. By 1980, Harvey Milk had been assassinated in City Hall and word was spreading about a mysterious "gay cancer."


The first professional baseball player who was upfront about his homosexuality with his teammates, Burke died of AIDS in 1995 (long before Richard Greenberg's award-winning play, Take Me Out, explored homophobia in baseball). But Burke's career was no less dramatic.

After the management of the Dodgers tried to bribe him into an old fashioned Hollywood marriage of convenience, Burke started hanging out with the gay son of Tommy Lasorda (the team's manager). In 1991, when “Spunky” Lasorda died of AIDS, his estranged father refused to acknowledge that his son was gay.  The only major force in Burke's career who was not interviewed for this documentary, Lasorda is nevertheless quoted as saying “My son wasn’t gay. No way. I read that in a paper. I also read that a lady gave birth to a fucking monkey. That’s not the truth.”


After Burke left professional baseball, he competed in the 1982 and 1986 Gay Games and was active in San Francisco's gay softball leagues. Unfortunately, heavy partying took its toll as Burke became addicted to cocaine and eventually became homeless. He died on May 30, 1995 at the age of 42.

Out: The Story of Glenn Burke offers painful reminders of the kind of bigotry that has been rampant in professional sports as well as a glimpse into the horrors of homelessness and the early years of the AIDS epidemic. Here's the trailer:

* * * * * * * * *
First Lady Michelle Obama's campaign to improve nutrition and reduce childhood obesity has received plenty of media coverage (including the recent announcement that Wal-Mart will reduce the amount of fats, sugars, and salt in the packaged foods it distributes under its own brand name). However, the challenges of purchasing healthy food can be daunting for those on a limited budget.

Many conservatives love to complain about "welfare queens who are living on food stamps" as a way of criticizing social programs designed to help the poor.  Several years ago, a few members of Congress decided to see just how difficult it was to survive on food stamps (the monthly allotment boils down to approximately one dollar per person per meal).


Considering how many Americans are currently unemployed and struggling to feed their families, Food Stamped (which will be screened at the upcoming 13th San Francisco Indie Film Festival) is very much a documentary for today's America. In this educational short, Shira Potash (a certified nutritional educator) and her filmmaker husband, Yoav,  spend a week taking "the food stamp challenge."


While Food Stamped tries to frame its message in as entertaining a format as possible, there is no escaping the fact that the people who made this film are not trapped in a cycle of poverty and/or joblessness. Shiva and Yoav may be willing to give up dessert and cheese for a week in order to show just what can be accomplished through the careful use of food stamps when grocery shopping, visiting farmers' markets, searching out free food samples, and occasionally dumpster diving, but they also live in a nice, clean house, have a functioning automobile, and are in excellent health.

With that caveat, the film provides an upbeat educational tool which can help educate those who criticize the food stamp program while relieving some of the stigma and humiliation from those who are about to enter the food stamp program. Food Stamped is not meant to focus on issues like depression, humiliation, and alienation. Instead, it shows how instilling the basics of nutrition in schoolchildren at an early age can help them develop valuable coping skills for subsequent adult and family crises. Here's the trailer:

Posted by geoheymont at 5:22 PM