Christmas 2012 has a big treat in store for fans of musical theatre. As people salivate over the thought of watching Hugh Jackman's portrayal of Jean Valjean in the film adaptation of Les Misérables, it's interesting to recall how the French Revolution gave birth to the populist movement (which favors the needs of the people over those of the elites).

Although many songs have been written about the need to seize the day and take control of one's destiny ("Marry The Man Today," "On The Other Side of the Tracks," "Before The Parade Passes By," "One Person Can Change The World," "There's Gotta Be Something Better Than This"), few have crossed international borders as successfully as "Do You Hear the People Sing."


While the trajectory of Barack Obama's life has been an inspiration to millions, like many presidents, his popularity has given new careers to those who can impersonate him with some degree of credibility.  Consider the fascinating story of Louis Ortiz, an unemployed Puerto Rican who was transformed into the "Bronx Obama."


The rise of the Occupy Wall Street movement, the Arab Spring, and the urgency of this year's Presidential election have thrown the battle between the 1% and the 99% into stark contrast. This fall, Bay area audiences have a unique opportunity to experience a musical and two documentaries devoted to three great American politicians, each a populist leader from a remarkably different generation. 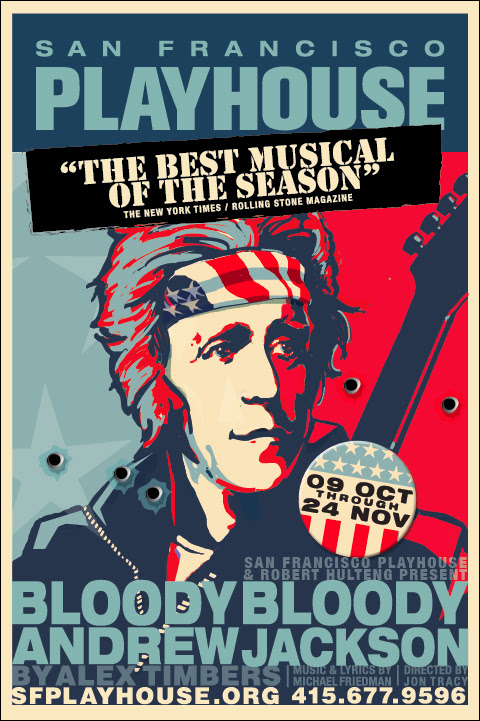 
"For our might and our hubris, we owe much to Andrew Jackson. And so, it's illuminating to take a fresh look.  His presidency gave flesh to seminal elements of our national American character which have made us, for better or worse, who we are today. He invented American Populism, the concept that 'the people' know better than 'the elite.'  He also created the concept of manifest destiny, the notion that the entire breadth of the continent somehow belonged to us.

By using young actors to play all the roles, Bloody Bloody Andrew Jackson stresses not only what a young country we were then, but what a young cauldron of contradictions we still are: violent and humane; acquisitive and generous. AJ exemplified these qualities. Even as we condemn some of his more violent acts, we are drawn into a compassionate understanding of the struggles he faced."

With a book by Alex Timbers (who wrote for The Pee-wee Herman Show) and music by Michael Friedman, Bloody Bloody Andrew Jackson offers audiences an interesting mix of edutainment.

Whereas the recent production of American Idiot tried to blast audiences out of their seats in the Orpheum Theatre, I was fascinated to see how music director and bandleader Jonathan Fadner kept the music at a level which invited audiences into the drama without ever overpowering them. Many of the cast members double as instrumentalists:

In addition to Davaran's driving performance as Andrew Jackson, Angel Burgess scored strongly as Jackson's wife, Rachel, while Safiya Fredericks did double duty as Henry Clay and Jackson's Indian friend, Black Fox. Ann Hopkins harvested one laugh after another as the show's Storyteller.

Do I think Bloody Bloody Andrew Jackson is a  great musical?  Hell, no!  But it's a lot of fun, staged with endless energy by Jon Tracy and performed by an exuberant cast eager to entertain (I'll bet some of the teachers who accompany San Francisco Playhouse's "Rising Stars" to performances of Bloody Bloody Andrew Jackson might get some new ideas on how to make history relevant to today's students).


* * * * * * * * *
Few 20th century American politicians were as deeply loved as Robert F. Kennedy. In her HBO documentary, simply entitled Ethel, Kennedy's last child interviews her famously shy mother about the family's history, what politics was like in the 1950s and 1960s, and how the Kennedy family has managed to cope with so many personal tragedies.

For those who remember JFK's younger brother, his infectious smile, his tireless work on behalf of the poor, and his final campaign, Rory Kennedy's documentary delivers plenty of laughs and a sense of awe at Ethel Kennedy's true grit (she once left a note in the FBI's suggestion box encouraging it to get a new director who could replace J. Edgar Hoover).


There are many moments of tenderness that the public has not always shared with the Kennedy family. One occurs when RFK returns from the Deep South, shaken by the poverty he has witnessed, and explains to his family how lucky they are. Throughout the film, it is a constant sweet surprise to hear all of the Kennedy children refer to Ethel as "Mummy."

If you don't have access to HBO, be sure to rent Ethel when it comes out on DVD. Expect to feel plenty of hot tears slowly streaming down your cheeks as you marvel at Ethel Skakel Kennedy's personal strength and wonder what might have been had her husband lived longer. Here's the trailer:

* * * * * * * * *
Those of us who have been utterly repulsed by the GOP's War on Women (transvaginal ultrasounds, attempts to redefine "forcible rape," threats to cut funding to Planned Parenthood, etc.,) were thrilled by the recent performances of Martha Raddatz and Candy Crowley as debate moderators. However, nothing in recent weeks compared to Julia Gillard's performance when the Prime Minister of Australia laid into the member head of the opposition party, Tony Abbott.


As I watched Gillard speak, I thought "Somewhere up in heaven, Ann Richards and Molly Ivins are smiling." Those who admired the 45th Governor of Texas won't want to miss a new documentary entitled Ann Richards' Texas that will be screened during the 2012 San Francisco DocuFest at the Roxie Theatre next month.

Richards was one powerful combination of brains and experience who never hesitated to speak truth to power ("Poor George, he can't help it.  He was born with a silver foot in his mouth!"). Not only is this film a delight from start to finish, it offers viewers a bracing reminder of what we've been missing from American politics: Strong women who aren't afraid to put stupid, misogynistic men in their place.

While the film contains cameos by President Bill Clinton, Lily Tomlin, Dolly Parton, Willie Nelson, Nancy Pelosi, and various news reporters, no one could ever hold a candle to Ann Richards. Here's the trailer:

Posted by geoheymont at 3:41 PM