Whether one takes the dramatic or comedic approach, truth telling is an acquired skill. Some people just blurt things out, failing to think before they speak. Others carefully mold and caress their thoughts into powerful intellectual weapons which can shatter brittle walls of pretense, denial, and ill-advised bravado.

One of the best truth tellers on the comedy circuit made her Castro Theatre debut this last weekend when Marc Huestis presented Miss Coco Peru in her new show, She's Got Balls! The beloved native son of The Bronx (who has spent more than two decades as a drag entertainer/activist)) packed the house with adoring fans who were eager to hear all about Coco's geriatric mother, Helen, and  the crazy neighbor who lived a floor below her apartment and kept hearing strange sounds. They responded with cheers when Coco admitted that, since it was quite possible everyone could leave the theatre and DIE that night, they might as well let the truth telling begin.


Anyone who has seen Coco Peru in action knows that she's a "giver" and a "healer" (it's a gift). So it came as no surprise when Miss Coco started warming up the audience by confessing her love for cock and "enabling" lucky members of the audience to confess their own love for cock before a crowd of more than 1,000 people.


Few comics can smash politically correct barriers with quite the lethal aim of Miss Coco Peru. Recalling a trip to Spain with her husband, Raphael, Miss Coco launched into a description of her day at a Spanish nude beach. Once she got over her initial shyness, she started to look around at the other people who had come out to enjoy the sun and the sand.

Sitting nearby was a morbidly obese woman.

When Raphael insisted that it was time to return to his sister's home for dinner, Miss Coco dug her feet in. "I have no idea how that woman managed to get down into a sitting position, but if you think I'm leaving before I see how she manages to stand up you're out of your mind!" she replied.

Her description of watching the woman rock back and forth as her husband held on and dug his feet into the sand had people in the audience gasping for air between hysterical bursts of laughter.


Wearing a shorter wig than usual, Miss Coco took time to sing some of her favorite songs. Along the way there was plenty of truth telling, some adorable pictures of Coco in her youth, and many words of wisdom from a veteran drag queen. At one point in the evening Miss Coco had to deal with a drunk in the audience who had wandered down to the stage apron (she handled his interruption with skill). 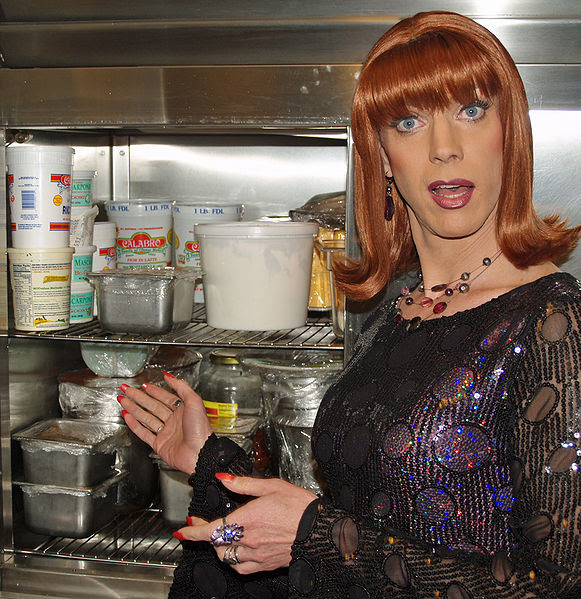 At the beginning of the show Miss Coco had promised to tell the audience how she got to see her sister-in-law's pussy ring. By the time she arrived at that blessed moment, the audience was fully primed to hear her describe a kitchen squat, a relative's twat, and the golden sparkle caused by a ray of sunshine that shone through the kitchen window and illuminated her sister-in-law's genital piercing. At that moment Miss Coco saw the light!


Another moment of high camp -- the kind that stays etched on your brain forever -- featured a Photo-shopped image of Miss Coco about to be ravaged by her childhood fantasy: The Creature from the Black Lagoon (one of the curtain calls featured a hunky model (Luiz Faria) in "Creature" drag stalking Coco across the stage of the Castro Theatre.


* * * * * * * * *
Do you like classical music? Do you have a kinky sense of humor? Did you think David Mamet's 1974 play, Sexual Perversity in Chicago, was pretty lame? Then head on over to Thick House, where Crowded Fire Theater Company is presenting the West Coast premiere of Thomas Bradshaw's twisted farce, which has been slyly and sarcastically entitled The Bereaved.

The playwright (who wrote Strom Thurmond Is Not A Racist in 2007) likes to describe his style as "reality on crack." Rest assured that Bradshaw leaves no racist stereotype unexploited, no lurid sexual fantasy unexplored and, thanks to Marissa Wolf's mischievous direction, no good deed unpunished.

If that sounds a bit daunting, try to imagine what might have happened if Joe Orton, Charles Ludlam, and Stephen Lynch had been asked to update and "enhance" 1991's hit comedy, Soapdish. Then fasten your seatbelts for a wild and bumpy ride. In her program notes, director Marissa Wolf explains that:


"The first time I read a Thomas Bradshaw play in 2009, I tore through each page with excitement -- breathlessly eating up each terrifying and startling scene. As soon as I reached the end of the play, I jumped up from my chair with a feeling of thrilled disgust, complicit in the realization of his subversive and sexually violent world just by reading the words on the page. Won over by the stunning honesty and directness of his satire, I knew this was a writer who offered something radically important to our national stage. Four years and many rich conversations later, I am still reeling from Bradshaw's work, only this time from the inside, as the director of the first production of one of his plays to be seen in the Bay area."

"It is precisely this discomfort, this landscape between hilarity and danger that has driven me into his work.  Central to each of Bradshaw's plays is a searing, honest, sometimes ugly portrait of humanity that challenges our cultural assumptions around privilege, race, and sexuality.  In The Bereaved, Bradshaw strips away the polite veneer of social norms to reveal a roiling underbelly of addiction, racism, and greed. While laughing uncomfortably at the seemingly absurd moments, I have come to understand that Bradshaw is a truth teller; his unflinching candidness about human behavior strikes a resounding chord that grabbed hold of me and the Crowded Fire Theater team years ago and sings out each night during the rehearsal and production process."

The fun begins when Carol (Michele Leavy), a corporate attorney married to Michael (Lawrence Radecker), an adjunct professor who only makes $12,000 a year, returns home from a heavy day at the office and picks a fight over whose responsibility it is to take out the garbage. As they take turns snorting cocaine and celebrating her legal victory with some booze, Michael raises the ante by trying to determine if Carol is referring to the garbage in the bathroom, the garbage in the kitchen, or the garbage chosen for recycling.

Suddenly, Carol collapses and must be taken to the hospital (but not until Michael has hidden his stash of cocaine). After a doctor (Geoffrey Nolan) runs some tests revealing that Carol suffers from endocarditis, she methodically lays out a plan so that, following her death, her husband will marry her best friend (Denmo Ibrahim).


When Carol's best friend, Katy, finds Michael in a curious state of stress, she asks him to describe his favorite sexual fantasy. Michael goes into elaborate detail about how he would just like to bend Katy over, pull down her pants, and eat her ass until she came.

Katy's fantasy is to be hit in the head with a brick by a black man who would then rape her. Katy and Michael soon figure out that if they follow through on Carol's plan for them to get married after her death, they'll only have a combined income of $72,000 a year. As a result, they'll have no choice but to start dealing drugs in order to maintain the $400,000 a year required to continue living the lifestyle they desire.

Several weeks following Carol's death, Melissa informs Teddy that she became pregnant the first time they had sex together. The two teenagers decide to celebrate with some of Michael's booze and cocaine. When Teddy warns Melissa that she shouldn't have any cocaine if she's pregnant, she responds ""Nah, it's all right to do coke while you're pregnant. It's just not okay to drink."

Can you see where all this is heading?


I could tell you that, following a call from distressed neighbors, after the police burst in on Michael (in blackface) fucking Katy while holding a toy gun to her head, one of the cops (Jeremy Falla) recognizes Katy as his child's psychologist. But that wouldn't explain how and why Jamal makes Katy choose between a Prius or a Mercedes Benz as a token of his affection, now would it?

Working on a delightful unit set designed by Maya Linke, with great sound design by Brendan Aanes (any fan of classical music will admire his brilliant choices for heavily symbolic interludes between scenes), Crowded Fire's ensemble has a rip-roaring good time making the most outrageous acts seem like the simplest and most logical course of events.  Expect to be deliciously shocked (if you're not doubled over in laughter for much of the play's duration).

Performances of The Bereaved continue through April 27 at Thick House on Potrero Hill (click here to order tickets). Here's the trailer:

Posted by geoheymont at 8:54 PM