Take a good look at Carol Burnett's expression in this photo. Would you think, for a minute, that the character she was playing was severely depressed? Of course not!  Anyone can tell that she's spoofing Shirley Temple. 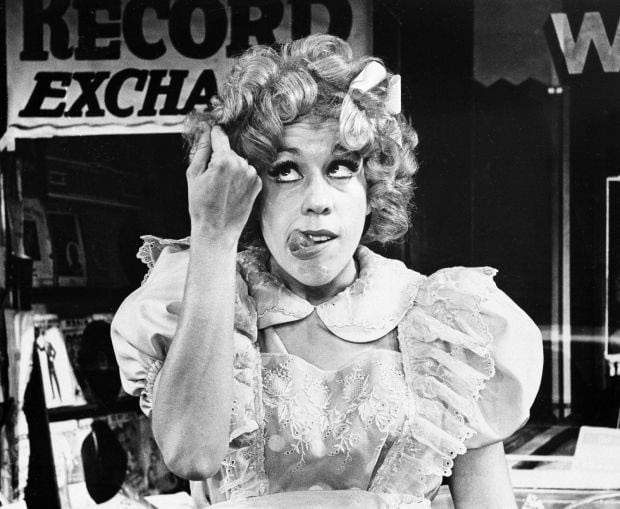 That picture is from 1964's Fade-Out, Fade-In, a box office failure as a result of the back injury Burnett suffered during the show's run. In the above scene, she teamed up with Tiger Haynes as two out-of-work Hollywood actors struggling to make some money by handing out leaflets. Haynes was imitating Bill "Bojangles" Robinson and Burnett was mimicking one of America's most beloved child actors. You can hear them on the original cast recording singing "You Mustn't Be Discouraged."


No one is immune to depression. How severely depression can pull the rug out from beneath someone's feet depends, to a large degree, on their emotional and psychological strength.  Just listen to Ethel Merman singing "Down in the Depths on the Ninetieth Floor" from Cole Porter's 1936 hit musical, Red, Hot and Blue.


How well a person manages to cope with depression may also be a function of their personal philosophy. One of the best credos for survival can be found in the Jerome Kern/Dorothy Fields song entitled "Pick Yourself Up" that was introduced by Fred Astaire and Ginger Rogers in 1936's Swing Time.


Two recent stage productions introduced Bay area audiences to protagonists whose spiritual core was taken away from them by circumstances they could never have anticipated (much less mitigated). Whether it be spiritual, emotional, or professional, once people have been stripped of the core motivation that has propelled them through most of their adult lives, what chance do they have of a full recovery?


* * * * * * * * *
Fans of bel canto opera are accustomed to sopranos delivering intensely dramatic (and often heavily ornamented) mad scenes in which a betrayed (and often betrothed) virgin loses her wits and bites the dust. Occasionally they may be treated to longer and more sober operas written for a solo soprano, such as Arnold Schoenberg's 30-minute Erwartung or Francis Poulenc's 40-minute La Voix Humaine.

Without a full orchestra, however, spoken monologues place exceptional demands of stamina, memorization, pacing, and nuance on an actor. When performed within the safety of a proscenium arch, the actor can concentrate his efforts in one direction. However, when performed in a three-quarter-round style of seating, a constant sense of motion and multidirectionality is required to establish and maintain communication with the audience.

Adapted by Gary Graves from a short story by Charlotte Perkins Gilman, The Yellow Wallpaper is currently receiving its world premiere production from CentralWorks. In his program note, Graves (who states that, in the process of crafting his adaptation, he hardly changed a word of Gilman's writing) explains that:


"At the age of 21, Charlotte Perkins Gilman married. A child soon followed and the young mother suffered a bout of what was then called 'neurasthenia, nervousness, or hysteria' (today, we would call it "postpartum psychosis").  A renowned physician of the day, Dr. Weir Mitchell treated Charlotte and prescribed for her a regimen he termed as 'the rest cure.' Mitchell instructed the patient to 'Live as domestic a life as possible. Have your child with you all the time...Lie down an hour after each meal. Have but two hours' intellectual life a day. And never touch pen, brush, or pencil as long as you live.' She was forbidden to write. Eight years later, in 1892, Charlotte published The Yellow Wallpaper, a short story of some 6,000 words, a cautionary tale about the risks of Dr. Mitchell's 'cure.'  The work was destined to become a landmark in American feminist literature, as well as a terrifying psychological drama in the vein of Gothic horror."


Directed by Jan Zvaifler, The Yellow Wallpaper stars Elena Wright as Jane, a woman whose physician husband (John) has prescribed an extended "rest cure" in a dilapidated old mansion. Left to her own devices, Jane eventually stops writing in her journal, starts hallucinating, and descends into madness as the room's yellow wallpaper continues to haunt her.


The Yellow Wallpaper marks the 47th play to receive its world premiere from CentralWorks. As is so often the case, the production is beautifully framed with meticulous care by Gregory Scharpen's superb sound design. Working with violinist Cybèle D’Ambrosio (who composed and performs music appropriate to Jane's mental deterioration during the performances), Scharpen managed to create subtle annoyances (the sound of a baby crying in another room) as well as constant reminders of the sounds a mentally unstable person might be hearing in her head. The results were forcefully dramatic and occasionally quite creepy.


Wright's carefully paced, beautifully layered and deeply compelling performance started as a model of innocence before accelerating into a dramatic tour de force which showed a desperately lonely woman trapped by fear and isolated against her will by the common wisdom that "father knows best." An added treat was the chance to be so close to the beautiful period costumes that Tammy Berlin designed for the two women.


Hatcher's play was inspired by the story of Edward Kynaston, a 17th-century English actor whose strong suit was performing in drag (most notably as Desdemona in Shakespeare's tragedy, Othello). Kynaston rose to fame during a period when the Puritans, led by Oliver Cromwell, had made sure that women were not allowed to act on an English stage. In his director's note, Ed Decker writes:


"I've wanted to produce and direct Jeffrey Hatcher's Compleat Female Stage Beauty for years. It is a wonderful play within a play about the theatre, featuring characters based upon many real people who lived in Restoration England circa 1660. We join the action just after the strict Puritan rule of Oliver Cromwell, at a time when the people of Britain were more than happy to embrace the reign of King Charles II and his love of pleasurable things."

"In planning for our production of the play, we chose an unembellished scenic design in order to create an acting space that keeps the focus on the characters, their relationships, and the fluid ageless situations they are navigating. We also wanted to reflect that, with the sudden re-opening of theatres at the onset of the Restoration, there was quite a scramble to get performance spaces up and running. Resources were scant. Mechanized stagecraft and advanced scenic painting techniques that would later be imported from France and Italy were not yet available or affordable.  Theatre companies had to rely widely on their imagination and that of the audience's in the rebirth of the art form in England. To that end, choosing just the right costume, prop, or sound effect was crucial in persuading the audience to suspend their disbelief. These elements had to likely do double, triple, or quadruple duty on stage as part of the company's repertory of plays."


In addition to being able to open up his story to include period splendor, realistic settings, lavish lighting, and powerful close-ups for the 2004 film, Hatcher combined the characters of Kynaston's dresser, Maria, with Margaret Hughes from his original stage play -- a move that helped to tighten the screenplay, strengthen dramatic motivations, and bring a new economy to a crucial part of his story.

On the surface, Compleat Female Stage Beauty would seem like a perfect fit for NCTC's audience.

Unfortunately, the New Conservatory Theatre Center's opening night performance of Hatcher's play lacked a great deal of electricity until late in Act II, when Kynaston coaches his dresser, Maria (who has stepped into the role of Desdemona), and then performs the final scene of Othello before King Charles II. Up until that point, much of the evening had seemed quite labored. Some of the causative factors might include the following:

Others in the cast included Colleen Egan as Lady Meresvale, Chris Morrell as Ms. Fayne, and Elissa Beth Stebbins as Margaret Hughes. Jeffrey Hoffman did double duty as the lisping Sedley and Ms. Revels while Matt Weimer took turns appearing as King Charles II and Betterton (the actor/theatre manager who is Kynaston's boss).


Performances of Compleat Female Stage Beauty continue at the New Conservatory Theatre Center through June 14 (click here to order tickets).
Posted by geoheymont at 12:30 AM