Legends In Their Own Minds

While there are many benefits to being employed, the loss of self esteem that occurs upon losing a job affects people in different ways. For those with easily transferable job skills, being fired may be a blessing in disguise. But for those who have invested a great deal of emotion in their work (or, perhaps more realistically, how they are defined by their jobs), a business failure or pink slip can be devastating.

Some cope with the ensuing sense of loss by working their way through the five stages of grief (denial, anger, bargaining, depression, and acceptance) as defined by Elisabeth Kübler-Ross in her book, On Death and Dying. Whether one chooses to wallow in shame or fight the seeming unfairness of it all, there's never any question that a person's self image may take a beating.


Numerous films have used one's loss of a job (or sense of reality) as a starting point for examining the human psyche. From Harold Lloyd's delightful 1928 silent film entitled Speedy (in which the happy-go-lucky title character never fears losing a job because he knows he can always find another) to 1993's Falling Down (in which a divorced and bitterly disillusioned defense engineer is transformed into a vengeful madman), a person's sense of loss is only as devastating as the fragility of his ego.


Two of San Francisco's recent film festivals screened movies in which a person's job loss resulted in a fall from grace. In one case, the protagonist was hardly a sympathetic character. In the other, a masterful screenplay combined with brilliant cinematography created a tale of incredible poignancy.


* * * * * * * * *
The 14th San Francisco Documentary Festival (DocFest) recently screened Andrew Goldman's The Desk, a study in egotism and male folly based on events that happened to the producer, director, and occasional star of the film (when he is not alternately being portrayed by actor Joe Canale).

Goldman was enjoying a successful career in journalism while conducting celebrity interviews for The New York Times Magazine when the rug was suddenly pulled out from under him. Although he was aware of cutbacks happening at the newspaper (and had received strong support from his editors), he found himself fired from a high-profile job shortly after his interview with Diane von Furstenberg was published. As Goldman explains:


"It’s impossible to play by the rules when there are two rule books (the official one and the real one). I’ve always been very willing to tread carefully when magazines have important relationships with advertisers. The difference is The Times still tries to pretend that it’s an organization that would never tolerate advertiser meddling."


Uncertain as to which grey lady (his employer or one of its heavy advertisers) was the real villain in his fall from grace, Goldman decided to make a short film about New Zealand's controversial and highly unpredictable broadcaster, Paul Henry. As the project developed, it became as much a story of Goldman trying to find himself as a tale of Paul Henry trying to get back on the air.

There's just one problem. The man who ran up against editorial problems in his career as a journalist finds himself sinking deeper and deeper into the whirlpool of Paul Henry's craziness after being named as the New Zealander's manager. As The Desk starts to focus more and more on Goldman's predicament, it becomes obvious that one is neither watching a documentary, a mockumentary, or a desperate cry for help.

The Desk is a cinematic ego trip (which Goldman readily admits) and, in some of the worst ways imaginable, a pure vanity project. As Goldman explains on his film's website:

"[The Desk] is a documentary I made about the making of a short film about my actual adventures with Paul Henry, a TV star from New Zealand whose career imploded on live television in 2010. In the midst of directing this scripted short, I got fired from my job as weekly interviewer for The New York Times Magazine. My life fell apart and I documented it. It’s incredibly self-indulgent and probably narcissistic, too. I mean, I’m interviewing myself for my own website, but I’m embracing the absurdity. If not for the support of my wife, Robin, and my wonderful Zoroastrian psychiatrist, I would have buried the drives in my back yard a long time ago. Dr. Nejad told me that making the film was a therapeutic and healthy way to deal with my anger, and that the film would probably resonate with those who’ve had similar feelings after being fired. She’s also said releasing it was my fate. The whole enterprise is patently self-indulgent. But that doesn’t mean The Desk isn’t a really fun movie."

Nor does it mean that it's a particularly good movie. Although it features cameo appearances by Ron Jeremy, Richard Simmons, and Fred Stoller, The Desk is a remarkably desperate and unfulfilling piece of work. To quote Macbeth: "It is a tale told by an idiot, full of sound and fury, signifying nothing." Here's the trailer:

* * * * * * * * *
If forced to choose a favorite screening at this year's San Francisco Silent Film Festival, I'd quickly point to 1924's The Last Laugh as the embodiment of the festival's slogan: "True Art Transcends Time." Based on a screenplay by Carl Mayer, the film was directed by F. W. Murnau and starred Emil Jannings as the larger-than-life doorman of the ritzy Atlantic Hotel.

Thanks to the combined efforts of Murnau, Mayer, and cameraman Karl Freund, the final product is a masterpiece of using lighting to establish mood and closeups to capture those rare moments which frame a character's despair and introspection.


As Michael Fox wrote in his program note:


"Mayer was a true pioneer of cinema; he thought, saw, and created stories in the grammar of film. He imagined and invented compositions and effects that the other key talent had to figure out how to achieve.  For artists such as Freund and Mayer, that was the best kind of challenge."

Mayer's screenplay focuses on an aging hotel doorman of Falstaffian proportions who has become a local cultural icon (much like the men in Beefeater uniforms who greet arriving guests at San Francisco's Sir Francis Drake Hotel). During a heavy rain, when the protagonist seems to struggle lifting a heavy piece of luggage from an arriving taxi, one of the hotel's managers decides to replace the doorman with a younger, stronger employee.

After years of loyal service, the doorman (who was proudly defined by his uniform) is reassigned to work as an attendant in a men's washroom in the hotel's basement. Needless to say, it is a crushing blow for him to go from this: 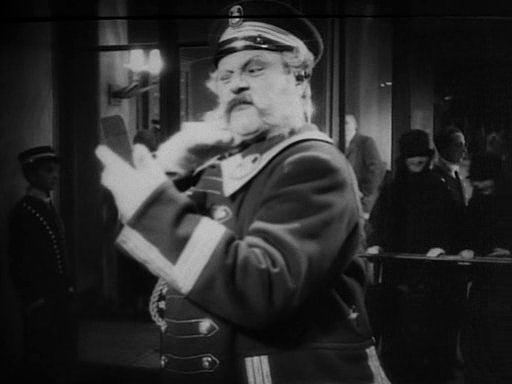 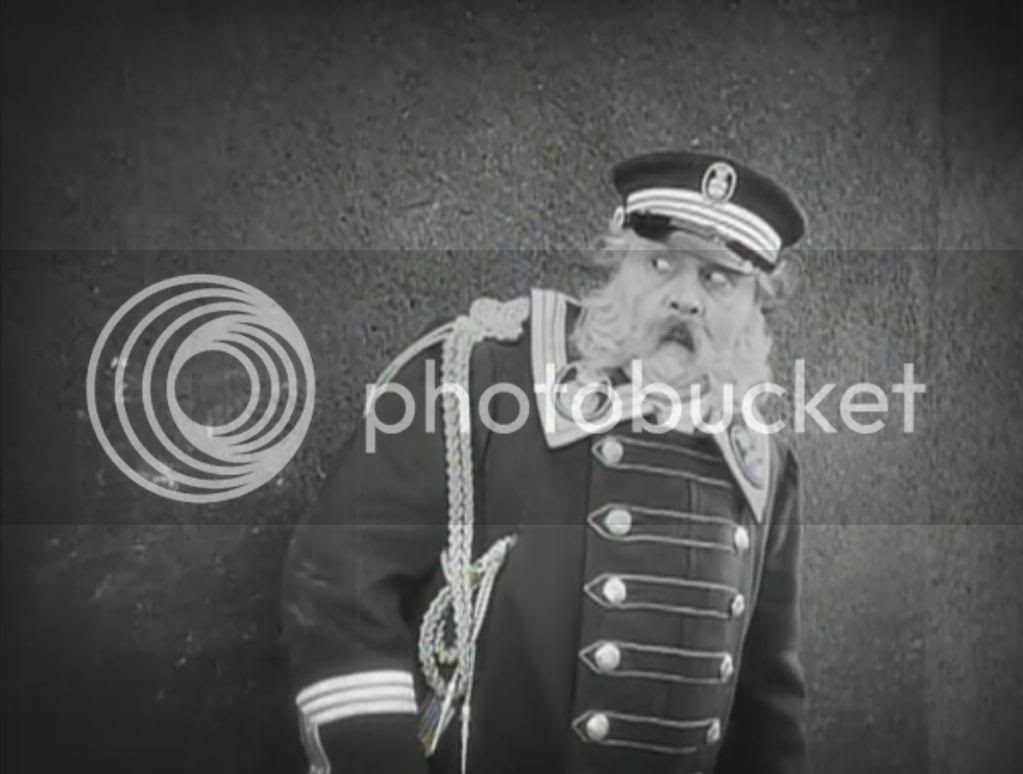 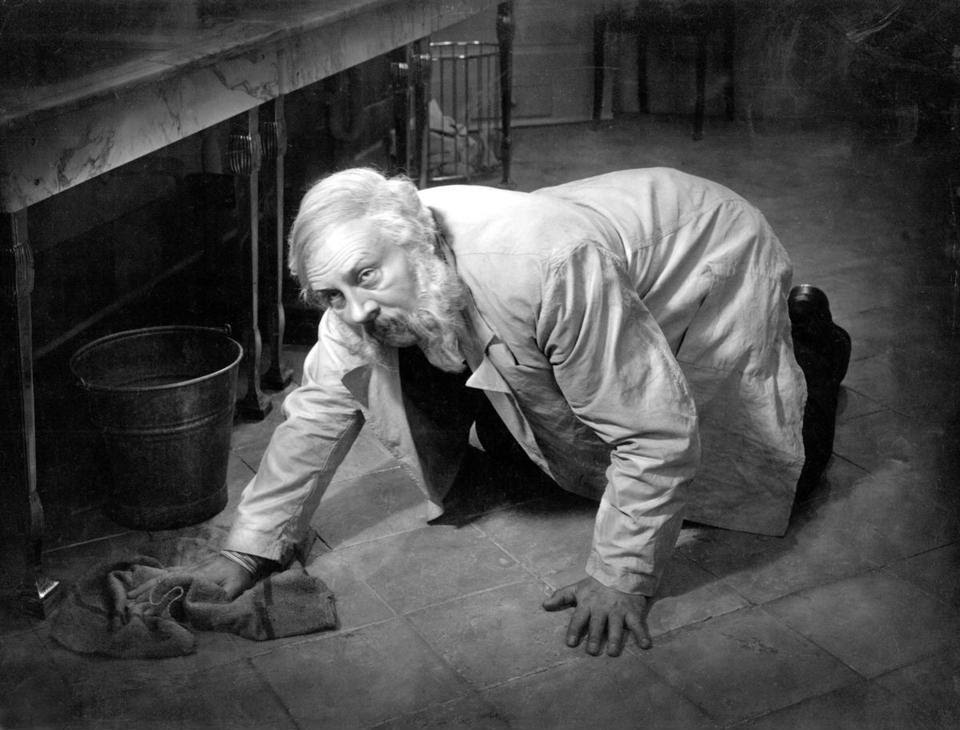 The screening at the Castro Theatre featured a new (and absolutely gorgeous) high-definition Digital Cinema Package from the Friedrich Wilhelm Murnau Foundation in Wiesbaden, Germany. The DCP was first seen in the United States at the Coolidge Corner Theatre in Brookline, Massachusetts as part of the theater’s Sounds of Silents program (which champions silent film music performance).

Under the leadership of  Professor Sheldon Mirowitz (who heads up the world’s only undergraduate degree program in film scoring at the Berklee School of Music in Boston), The Berklee Silent Film Orchestra accompanied both the Brookline and San Francisco screenings of The Last Laugh, thus marking the debut of a thrilling bicoastal artistic collaboration. The following clip shows Mirowitz working with his students on a commissioned score for Harold Lloyd's 1923 classic, Safety Last!


In his introductory remarks, Mirowitz noted that, as part of his course work, he creates the basic themes to be used in a newly-commissioned silent film score and then assigns a separate reel of film to each of his top students. They, in turn, create the score for the film (at the San Francisco screening, each of the student composers conducted the section of the film for which they had crafted the score).

Mirowitz also described how, when The Last Laugh was being made, its producer insisted on a happy ending. Mayer and Murnau's hilarious solution sends audiences out of the theatre on an appropriate high note. Although the following clip lacks the breathtaking high definition of the DCP screened at the San Francisco Silent Film Festival, at the very least it allows cinephiles to watch The Last Laugh in its entirety and marvel at its craft.

Posted by geoheymont at 3:04 PM