Over The Top And Into The Woods

How many times have you heard a person described as "one of a kind" or "someone who marches to a different drummer"? Does that mean the person is a bona fide eccentric? Someone who hears voices no one else can hear? Or does it make the person someone who lives by their own rules instead of those laid down by society? Someone who might best be described by the saying "They broke the mold after that one came out of the womb!"

Whether one considers historical figures like Joan of Arc, Napoleon Bonaparte, and Grigori Rasputin or fictional characters like Fagin, Medea, and The Wicked Witch of the West, one thing is certain: these people may vex you, but they will never bore you. Radical Faeries, nasty women, and professional clowns may offend you with their outrageous behavior, threaten your insecurities, and confound you with their logic (or seeming lack thereof), but trust me: they sure as hell won't bore you.

When such characters spring to life from a writer's imagination, their behavior can be polished, shaped, and edited to suit a dramatic purpose. Whether brought to life in a reader's mind or through an actor's performance, the permutations of how the character may be perceived are innumerable.

When one encounters a person in real life whose spirit is so distinctive, spontaneous, and unconventional that the experience leaves one in awe, then attention must be paid. Consider, if you will, the many faces of Rumi Missabu. 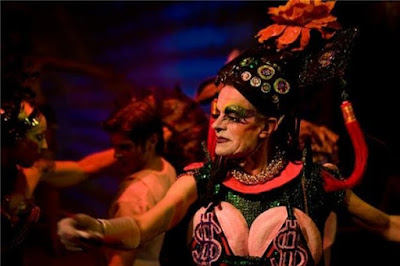 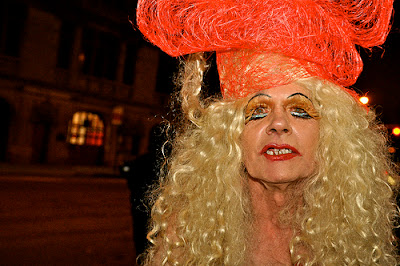 * * * * * * * * *
One of the documentaries being screened during the 2018 SFIndie Film Festival is Ruminations, a film by Robert James devoted to chronicling Missabu's life and art. Perhaps best described with three key worlds from A Chorus Line ("One Singular Sensation"), Rumi -- born James Bartlett -- began his career in Los Angeles, where he shared an apartment with Cindy Williams. After moving to San Francisco, he became one of the founding members of the infamous Cockettes, performing in such off-the-wall productions as Tinsel Tarts in a Hot Coma, Journey to the Center of Uranus, and Elevator Girls in Bondage.


In the fall of 1971, nearly 50 bearded drag queens boarded a flight to New York. Following the debut of the Cockettes on the stage of the Anderson Theatre, Gore Vidal famously proclaimed that "Having no talent is not enough." Although bad reviews rarely discourage artists living in a fantasy world, the Cockettes disbanded the following year. As Rumi explains:


"All of us started out on LSD (including during performances). That was the drug of choice. Our audience came to our shows just as stoned as we were. There were no walls between the stage and the audience. You could just jump on or you could be someone’s trick, and just be recruited for the next show and be a Cockette forevermore. The Cockettes weren’t about rehearsing; we were about anarchy. We resented direction."


After 1972, Rumi pretty much disappeared, living off the grid while working under the table as a housekeeper and prep cook. For the next 30 years, the only piece of identification he had was his San Francisco Public Library card. Ruminations catches up with the 70-year-old Missabu as he struggles with emphysema and lung cancer. Throughout a series of interviews, Rumi's free spirit and sense of humor still sparkle as he reminisces about the past, describes a string of famous dance parties he produced in New York, discusses what it means to mentor a new generation of gay performance artists, and discloses what it feels like to have a devoted boyfriend (Sebastian Cheron) who is barely half Rumi's age.


After receiving a request from the New York Public Library for the Performing Arts to donate his papers, Missabu became involved in identifying and sorting photographs and memorabilia from his past. James's documentary includes input from Missabu's old friends (Billy Bowers, Dan Nicoletta, Scrumbly Koldewyn, Donna Persona, Puppy Love, and Vinc LeVinc). One friend wryly mentions Rumi's "perfect penis memory." Ruminations ends with a loving testimonial from Taylor Mac, who stresses that "Without Rumi, we wouldn't be here doing this." 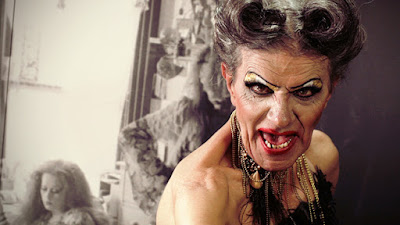 Ruminations has its world premiere at the Roxie Theatre on February 4. Here's the trailer:

* * * * * * * * *
American Conservatory Theater welcomed the new year with two big reasons for celebration. First, the announcement that Pam MacKinnon had been chosen as the company's next Artistic Director. Second, that Carey Perloff was directing a new production of Harold Pinter's 1957 comedy-thriller, The Birthday Party. One of the English playwright's most frequently performed works, The Birthday Party is set in boarding house by the sea that is run by a British couple in their sixties.

A quiet man, Petey (Dan Hiatt) rents out deck chairs to people spending a day near the ocean's edge. A bit more of a chatterbox, Meg (Judith Ivey) looks after their boarding house which, although it only has one guest, she considers to be something of a national treasure. Why? Because it is listed in a tourist guide of recommended accommodations.


Working on a tidy unit set designed by Nina Ball (with costumes designed by Candice Donnelly, lighting by Robert Hand, and sound designed by Darron L West), Pinter's play begins as an absurdist farce with Meg fretting over whether or not Stanley (Firdous Bamji) has come downstairs for his breakfast while she pesters Petey to read any interesting stories in the newspaper to her. It's never clear to the audience whether this is an old routine the couple has settled into, whether Meg has forgotten how to read, or whether she is functionally illiterate.

While Meg can easily seem like a ditz who has settled into a routine conversation with her husband, there is no doubt that she harbors a crush on their guest, Stanley. The structure of Pinter's play takes a sudden turn from seemingly mindless absurdity to a tense hostage situation when Meg goes out to the supermarket to pick up some supplies and, during her absence, two menacing characters arrive to fetch Stanley.

Goldberg (Scott Wentworth) is a masterful manipulator while the hulking McCann (Marco Barricelli) is a thug with a curious habit of gently and meticulously tearing apart a newspaper page, one column at a time. Once they have Stanley in their sights, the two men become like lions stalking and playing with their prey as they warm up for the kill. If that image doesn't do the job for you, imagine if you had a loving aunt and uncle whose home was suddenly invaded by Donald Trump's creepy policy adviser, Stephen Miller.


"The Birthday Party is about the resistance to being boxed in (the visceral experience of being hunted)," states Perloff, "but it’s also about coercive political and religious groups. Those themes really announce themselves more now because of the world we live in: the individual against the state. Pinter always said that this was his first political play. He grew up during World War II and knew that the knock at the door was not good news. The fact that he was a Jewish kid living in London during the Blitz at a time of enormous anti-Semitism is highly relevant to Pinter’s sense of the world.”

“In Pinter’s work, you have to look at where people are vulnerable and where they attack. For Pinter, there are two kinds of language: language that is predatory and language that masks the terror of silence," stresses Perloff. "Silence is what Pinter’s characters are most frightened of: that vulnerable place where people really live. So they talk around that in order to protect themselves.”

The harsh contrast between farce, a bizarre game of blind man's buff, and the brutal way in which Goldberg and McCann interrogate Stanley can be extremely unsettling for an audience. However, Barricelli (who portrays the thug, McCann) finds great pleasure in the challenge of performing onstage in a drama like The Birthday Party.


“The script of a Pinter play is like sheet music: there are dashes, ellipses, pauses, and silences. If you follow these notations in the script, then you can play it. In my experience with Pinter, I’ve found that the way to rehearse it is to honor those notations (even if you’re not yet sure what they mean) and, by the simple fact of repeating those rhythms and silences, you will see what the moment is about. You have to play the moment purely for what it is. It’s essential that the actors and the director resist the impulse to explain it.”


In a month when women have been forcefully pushing back against men with the #MeToo movement, and marching nationwide to celebrate the anniversary of their astonishing protest against Trump's inauguration in January of 2017, I found it fascinating to watch the two characters Pinter created for women in a production of The Birthday Party directed by a woman. Each seems a bit cartoon-like until one realizes that, while Meg may be seriously off her rocker, her neighbor, Lulu (Julie Adamo), is not only younger and sexier, but has also acquired some valuable street smarts. As Perloff (who staged The Birthday Party in 1988 at the Classic Stage Company in New York) explains:


“Meg is the heartbeat of the play. She’s a poor British housewife, an innocent who believes in Stanley’s goodness, but also has some bizarre sexual relationship with him. She knows he is psychologically fragile, but she’s there to protect him. The end of the play is heartbreaking, because he is taken from her into this terrifying male world, represented by the unseen Monty and the big black car. Meg is going to have to survive without him."

"Lulu, by contrast, is a figure who comes out of British comedy: a sexy, working-class wit who is totally taken advantage of by Goldberg. She comes downstairs the next morning and throws a fit. It’s a really hard scene to play. She’s not stupid. She’s ignorant. She’s a small-town girl who never left the seaside, but she looks evil in the face, knows what she’s looking at, and she escapes.”


While Pinter's play delivers much hilarity and peril, the evening's most stunning achievement is Judith Ivey's priceless characterization of Meg. Half clueless old lady and half lower class clown, it is an experience to treasure. Performances of The Birthday Party continue through February 4 at the American Conservatory Theater (click here for tickets). Here's the trailer: