The Power of Aging and Raging Women

After centuries of wooing, screwing, marrying and living with women, one might think that men would have a better idea of how to co-exist with them. When 16-year-old Greta Thunberg recently arrived in the United States, conservative media went bullshit trying to figure out how to destroy and discredit her. After reading so many irrational claims that Thunberg was a mentally ill media whore being exploited by her parents, a curious meme started floating across the Internet. Its simple, yet powerful message stated that the reason so many conservative pundits and politicians were having a big problem dealing with all the attention being focused on Thunberg was because they didn't know how to react to an intelligent teenage girl whose image had not been sexualized by the media.

With Marge Champion celebrating her 100th birthday in September and Angela Lansbury having turned 94 on October 16, it should be obvious that for many women, aging has not just included a quest for voting rights, healthcare, and dignity, but also a search for relevance. Take a moment to read Donna Ashworth's brilliant poem entitled "One Day, An Army Of Furious Older Women Will Take Over The World."

Then, consider the empathic strength and emotional steel of 88-year-old actress Olympia Dukakis who, in a blazing new documentary about her life (being screened at the 2019 San Francisco Greek Film Festival) proudly describes herself as "an octogenarian motherfucker!" When one recalls some of the song titles written by men about women (such as "How Do You Solve A Problem Like Maria?" and "How To Handle A Woman"), it becomes easier to understand why a blubbering mass of toxic sludge like Donald Trump cannot cope with being confronted by the fearless Speaker of the House, Nancy Pelosi. 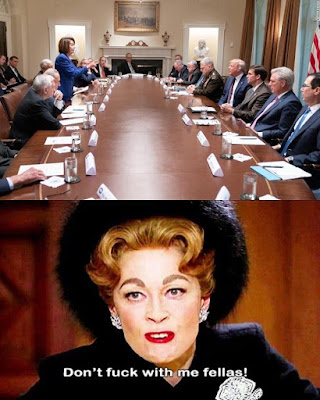 In recent weeks, two new book titles by women who write for The New York Times have been released which I look forward to reading. One is a biography by Alexandra Jacobs entitled "Still Here: The Madcap, Nervy, Singular Life of Elaine Stritch." The other is "No Stopping Us Now: The Adventures of Older Women in American History" by Gail Collins. In her review of No Stopping Us Now, former television journalist Lesley Stahl writes:


“Collins’s excavation of the past has produced a vault of nuggets and gems. She found that in the 1880s it was widely presumed that sex ended at 45, and menopausal women were told to avoid dancing, reading novels, and going to parties. Yet this was the same era in which Annie Oakley was wildly popular as the star of a Wild West show, at the getting-up-there age of 37. Among my favorite passages in No Stopping Us Now are descriptions of spinsters. A newspaper article in 1790 described them as a ‘putrid abomination to the deity.’ Another paper put it this way: ‘An old maid is one of the most cranky, ill-natured, maggoty, peevish, conceited, disagreeable, hypocritical, fretful, noisy, gibing, canting, censorious, out-of-the-way, never-to-be-pleased, good-for-nothing creatures.’ Harrumph.”

* * * * * * * * *
Although, for centuries, dolls have been beloved toys for girls, I'm sure that when Mattel launched its line of Barbie fashion dolls in 1959 it never imagined that, 60 years later, the public would embrace dolls representing such progressive political figures as Supreme Court Justice Ruth Bader Ginsburg and Congresswoman Alexandria Ocasio-Cortez. E.T.A. Hoffmann's stories about extremely life-like mechanical dolls provided the inspiration for the 1870 ballet Coppélia (with music by Léo Delibes), The Tales of Hoffmann (an opera by Jacques Offenbach that premiered in 1881), and Tchaikovsky's famous ballet, The Nutcracker (which premiered in 1892).


But what happens when a real woman is dressed like a doll and displayed as a piece of edutainment to serve as a marketing strategy? In 1834, Afong Moy was brought from Guangzhou to New York City by Nathaniel and Frederick Carne to help them sell their imported exotic goods to America’s new middle class. Prior to that time, the only Chinese people in the United States had been men, which made Afong Moy the first Chinese woman to set foot on American soil. She gave her first performance on November 6, 1834 and, while on tour in 1835, met with President Andrew Jackson, who wanted to see her four-inch bound feet. After her contract with the Carne brothers ended, Afong Moy signed with P.T. Barnum (who also featured the Siamese twins Chang and Eng Bunker in his freak show). Her last recorded exhibition was at the New York City Hotel in April of 1850.


Magic Theatre is currently presenting the Bay Area premiere of The Chinese Lady in a fascinating production directed by Mina Morita. Using a handsome unit set by Jacquelyn Scott, costumes by Abra Berman, and lighting by Wen-Ling Liao, Lloyd Suh's play stars Rinabeth Apostol as Afong Moy with Will Dao as Atung.


Suh had never heard of Afong Moy until he started reading Erika Lee’s book entitled "The Making of Asian America: A History." As the playwright continued his research, his struggle to find an ending for the play revolved around the question of why Afong Moy had been lost to history. Could it be that no one cared about her?

“Most of my peers are Asian American theatre artists who, when they audition, are hyperconscious of the way they have historically been seen. The thesis of the play was hidden in the first scene that I wrote in 2013, where she says ‘I’m not here. All I am is somebody trying to conjure Afong Moy. This is not my body. I am not actually speaking,’” explains Suh. “I didn’t know what that meant at the time. I just wrote it because I was thinking ‘Why is she talking like this? Why is she talking in a contemporary vernacular?’”


The 2018 world premiere of The Chinese Lady was a co-production of the Ma-Yi Theater Company in New York and the Barrington Stage Company in Pittsfield, Massachusetts. As Afong Moy describes the strangeness of eating with such "barbaric" utensils as forks (as opposed to chopsticks) or sleeping on a bed that is three feet off the ground, the audience begins to realize that the curiosity factor surrounding Afong Moy can work in two directions.

Rinabeth Apostol gives a riveting performance as Afong Moy that begins with a doll-like innocence, progresses into a coy tease, and, with a delicious touch of magical realism, eventually transcends time. How did Mina Morita approach The Chinese Lady for Magic Theatre's production?


"The originating point of the exhibition was that Afong Moy was going to help people understand how Chinese furniture might fit into their lives so that it could be sold to Americans. Jackie Scott has created a beautiful platform and cage inspired by Chinese art and culture, but as seen through a Western lens. The idea of the performative nature of the orientalization, sexualization, consumption of, and brushing off of the power of an Asian-American woman (because of what is perceived as her diminutive stature) actually reveals a deep resilience and strength on the part of that woman."

"We are exploring how the gaze has shifted over the course of time, in relationship to how American and Chinese relations shifted through the Opium Wars to today. That means really understanding how a gaze is consumptive and also can be about true understanding. The aim is to understand more deeply what her experience was -- not only in the year that she arrived -- but at the ages of 16, 17, 29, 44 and then 64 to today. We actually get to a point where we're in 2019 and Afong Moy is facing us with this deep wisdom through all of that time and providing an invitation for true understanding."

Lloyd Suh's clever inclusion of a male figure named Atung (Will Dao) serves multiple purposes. First, it prevents The Chinese Lady from becoming a monologue with no other reference point than Afong Moy. Second, it reinforces the social distinctions between a woman who comes from a supposedly upper class Chinese family and a lowly manservant whose sole purpose is bringing Afong Moy her food and tea while she is performing in public. Third, and most slyly, it shows how repeated performances by Afong Moy begin to lose some of their novelty as she becomes more accustomed to life in America and her exotic appeal fades for those who must attend to her needs.


An often underappreciated talent, Dao essentially becomes Afong Moy's straight man until she decides that his presence is detracting from her performance. Though mostly silent, Dao's body language speaks volumes about what his character is thinking and feeling. When he is finally dismissed because of Afong Moy's need to be relevant (and to have Atung remain as irrelevant as possible), Suh's play enters into unexpected territory.


Performances of The Chinese Lady continue through November 3 at Magic Theatre (click here for tickets).


* * * * * * * * *
In his poignant documentary about actress Olympia Dukakis, Harry Mavromichalis paints an impressive portrait of a long life that started as a bit of a wild child, progressed through a professional career filled with solid work on stage and screen, and has gifted Dukakis with a life force that could easily be mistaken for the Earth Mother. Shot over three years (beginning on the subject’s 80th birthday), Mavromichalis explores the actor’s struggle with her ethnic roots, the values of her immigrant parents, her compulsive honesty, fearsome communicative skills, and acquired wisdom.


Born in Lowell, Massachusetts, Dukakis attended Boston University and built an acting career upon hard work and blazing talent. In addition to winning an Academy Award for Best Supporting Actress and Golden Globe for Best Supporting Actress in a Motion Picture for her role in 1987's Moonstruck, she provided the voice for Grandpa's love interest on The Simpsons. In 2003, Dukakis published an autobiography entitled "Ask Me Again Tomorrow: A Life in Progress." In 2011, she was honored as a Grand Marshal in the San Francisco Pride Parade. With a keen awareness of her age, at a key moment in the film Dukakis points to three clay figurines that she loves: one represents a child, another represents a mother, and the third represents a crone.


Filmed primarily during President Obama’s administration, the documentary’s themes of immigration, women's empowerment, and social alienation didn’t pack quite the same punch as they do during the nightmare of despicable desperation and delegitimizing dysfunctionality that goes by the name of Donald Trump. In his Director’s Statement, Mavromichalis writes:


“The film’s cinema-verité style allows the audience to constantly move alongside Olympia as she navigates between rehearsals, workshops, family life, and finally the journey to her ancestral home in Greece. Her most captivating quality is how she consistently allows herself to be vulnerable in both her work and personal life. Intricately weaving visceral impromptu personal moments with footage of her performances (both on and off screen), we experience the presence of an unrelenting female energy. Not only does her story add to the perpetual ‘herstory’ of women withstanding and overcoming their obstacles and oppressors through the passage of time, it also gives us insight into how Olympia overcame the impediments that affected her life as the daughter of immigrants and as a woman in a male-dominated society.”

“Exhibiting both candor and vulnerability, we see her deal with age, grief, and sexuality while opening up about her past struggles with depression, suicide, and drug addiction. Relinquishing and confronting her inner doubts and demons, we reflect upon her life, finding strength in sisterhood and the unity of female solidarity. We are granted the raw, unfiltered attitude of Olympia without a script to guide her. Her fierceness is seen to persist throughout her daily life beyond the stage or film. Self-doubt has thickened her skin and sharpened her mind; her energy is contagious. Despite her age and innumerable experiences in her life, her determination to continue to move forward and overcome the hurdles that life places before us all is an inspiration.”

Posted by geoheymont at 9:29 AM