Centaurs, Satyrs and Stand-Up, Oh My!

During the past few years, as more and more news stories have focused on domestic violence, rape culture, birth control, abortion, and numerous other women's health issues, an important cultural wave has started to gain momentum. Straight white men who insist on trumpeting their profound ignorance about human anatomy while insisting on the veracity of such dubious concepts as "legitimate rape" have been discredited and shamed for the fools that they are. Meanwhile, what started as a very slow drum roll has slowly but steadily been escalating into a feminist roar.
Valid questions, to be sure. But sometimes the answers are not what one might expect. Under Stuart Bousel's artistic leadership, the San Francisco Olympians Festival has consistently welcomed female playwrights. Bousel's process of commissioning plays runs counter to the way many traditional theatre companies structure their new works festivals. The results Bousel gets are often fascinating.

With 2014's theme of The Monster Ball (as opposed to "The Monster's Balls"), it was interesting to see how two talented women would showcase the romantic challenges confronting Ancient Greece's centaurs and satyrs.

* * * * * * * * *
Directed by Ellery Schaar, Megan Cohen's rowdy "postmodern vaudeville comedy" entitled Centaurs or The Horse's Ass starred Elissa Beth Stebbins and Marlene Yarosh as rival centaurs. It is also probably the only play I've ever encountered that begins with a spitting scene as one centaur calmly chews up and spits out raw carrots. Cohen makes sure that her two centaurs get to use their hybrid anatomy for testing various bad jokes, power dynamics and, when necessary, silencing each other with a horse head mask.


"Centaur’s hybrid self has the torso, arms, hands, head, and mind of a human, and the legs, rump, tail, and sex of a horse. Because of their liminal status (half-man and half-animal), these embodied mash-ups hold an uneasy and divided place in the mythological canon. When a centaur enters your myth, you will get one of two personas; either you encounter a wise and knowledgeable teacher in total control, with a wry and nuanced perspective on civilization…or you encounter an untamed savage, governed only by base and barbaric appetites. Will your centaur be ruled by the top half, or by the bottom? You can’t be sure. This creature, and its fundamental biologically-wrought tension between society and nature, has proved among the most enduring of the Greek monsters, popping up everywhere from medieval times to mid-century Disney to the contemporary world of Harry Potter. As long as we wrestle with the two halves of our selves, as long as we each undergo the private war between impulse and restraint, there will be centaurs in our stories."


Although Cohen and Bousel cast two women as their centaurs, the gender of their actors was not as important as the concept of two centaurs trying to tell corny jokes and perform bits of physical comedy onstage. While not all of Cohen's jokes landed as well as hoped for, Centaurs or The Horse's Ass drew sufficient laughs from an audience packed with the playwright's friends and assorted well wishers.


“In ancient Greece, the satyr and his counterpart (the nymph) were sexual icons. Tragedy and comedy, the main two forms of Greek drama, are familiar to anyone who has seen a play. In the first, things end up worse than they started out; in the second, better. But the ancient Greeks had a third type of play, tragicomedy, exemplified by bawdy satyr plays, similar to modern day satirical burlesque, and complete with phallic props. Unfortunately, only a few fragments of these raucous satyr plays have survived. Our play might not reach the obscene heights of these ancient romps, but focuses on the same main characters: the satyr and the nymph." 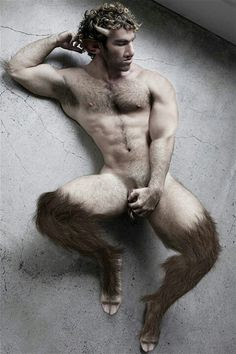 "Since when did 'horny as a goat' and nymphomania become a bad thing? What if a creature whose very soul is the embodiment of wild and raucous passion finds himself caught in our modern-day sterile predicament? What does it take to release the beast? And should we…?  Our hapless satyr, Peter, has lost his mojo. In a world of manscaped, owl-glassed, metrosexual hipsters, Peter’s back hair, frumpy sweaters, flute playing, and goaty body odor just aren’t attracting the ladies. He pines for a time when he and his kind’s raw animal sexuality was all that was needed to trigger nights and days of sensual pleasure. Desperate, he seeks guidance from a human pick-up artist to learn some modern tricks of the trade. And then he runs into a frustrated nymph with a coach and agenda of her own. This play explores taboos and social norms (past and present, real and mythic) in an attempt to answer the question: What is so dirty about sex anyway?"

Needless to say, these two have the kind of social clumsiness that could stump any dating consultant. Lumina likes to wear tacky Christmas-style sweaters decorated with candy canes while Peter prefers a frumpy sweater made from the hair on his father's back. While both should be driven by lust, they'd prefer to hang out in a bookstore or go home and read to each other...before fucking.

Roman & Turnage's script succeeds most when the shock of recognition takes on new comic meanings, such as Peter's miserable bleating when he feels emotion. As mere mortals, Daphne and Dalton must rely on booze to make themselves interesting. While the script needs some tightening, I especially enjoyed Tony Cirimele's endearing performance as Peter (a satyr in need of better social skills).


* * * * * * * * *
There's little doubt these days that some of the best investigative reporting and political commentary is coming from comedians rather than political journalists. Following in the footsteps of Jon Stewart and Stephen Colbert, John Oliver has taken the lead as someone who can make the ghastly seem ridiculous, the ridiculous seem ghastly, and push his viewers toward delivering results. One of his finest demonstrations of how a comedian can raise social consciousness can be seen in the following clip from Last Week Tonight With John Oliver.


As part of November's San Francisco International South Asian Film Festival, audiences were treated to a screening of Stand Up Planet: The Documentary (which can be viewed online by clicking here). Directed by David Munro, the film includes cameo appearances from such comedy titans as Bill Cosby, Norman Lear, and Carl Reiner.

The film's focus, however, is not on comedians of the past, but of who today's rising comedians are in other parts of the world -- particularly where even attempting to make a living as a comedian can get a person into serious trouble. The set-up is simple: Los Angeles-based comedian Hasan Minhaj travels to India and South Africa to learn what it's like to work as a stand-up comic in foreign cultures and invite two of the best comics he finds to travel to Hollywood to perform in a television special.


Minhaj's time in India provides him with an eye-opening experience as he learns about the country's poor sanitation and its effect on the health of India's youth (particularly its girls). Comedian Tanmay Bhat takes him on a tour of some slums and riffs about why Mumbai smells so bad.


The two comics who make the final cut are Aditi Mittal (one of India’s only female stand-up comedians) and Johannesburg's Mpho "Popps" Modikoane.


Click here to watch Stand Up Planet: The Documentary online. In the meantime, here's some footage from the film: